Snowy White: Doing the dishes with Peter Green and how to liquidate Roger Waters

Between 1998 and 2007, Alabama Thunderpussy released six studio albums; finally calling it quits in 2008 stating, “There are no hard feelings between us and no bullshit politics. It’s pretty much the end of an era. To quote George Harrison, everything must pass.

15 years later, out of left field comes an Alabama Thunderpussy reunion show! Totally unexpected but incredibly welcome, on December 3, 2022, at Richmond Music Hall in the band’s hometown of Richmond, Virginia, Alabama Thunderpussy will play their first show since 2007. Founding member and guitarist Erik Larson, who has also performed with: Avail , Axehandle, Birds Of Prey, The Might Could, Backwoods Payback, Omen Stones, and Thunderchief, plus the release of solo material, spoke exclusively with BraveWords scribe Aaron Small about the ATP’s return.

“Well, yeah, it was out of left field, and it was on purpose because we wanted it to be a surprise. Because you’re right, nobody thought it was going to happen. I give full credit for that. to JB Matson from Maryland Doom Fest, because he actually offered us the headliner for this festival, which was held in June (2022). But because of the schedule, it didn’t work out. We don’t couldn’t do it, because Kyle (Thomas, singer) was originally supposed to be in England with Trouble. So that started the conversation – if we all want to do something, maybe we could do something? I phoned and I talked to a bunch of people who are old friends and people in “the industry”. I was like, ‘What do you think? Do you think people Do you think they’ll want to hear us play those songs again? And everyone was like, ‘Oh yeah, you should do that.’ It just seemed like the more we talked about it the more we came to the conclusion, the best thing to do is be who we are. Let’s put on a show in town and see if people care. That’s the thing. easier to do. We can practice here; we just have to bring Kyle here (from Louisiana). So that’s how it worked.

Alabama Thunderpussy’s latest album, Open Fire, featured vocalist Kyle Thomas, guitarists Erik Larson and Ryan Lake, bassist Mike Bryant and drummer Bryan Cox. Four of these five guys will take the stage on December 3 at Richmond Music Hall. “Everyone except the bassist,” Larson confirms. “About two meetings, Mikey (Bryant) was like, ‘You know what man? I like my really simple, uncomplicated life. And I know what band life is like, I don’t think I want to do that. Fair enough, no problem. Immediately we thought of Sam (Krivanec), who was on River City Revival and Constellation. His son and my son are best friends; he lives six blocks from here. Everything the world was like, ‘Yeah, let’s call Sam.’ So Sam Krivanec is back. Talk about keeping him in the family. “Totally. We are all old people. I don’t really have the patience to deal with arrogance or youthful opinions. 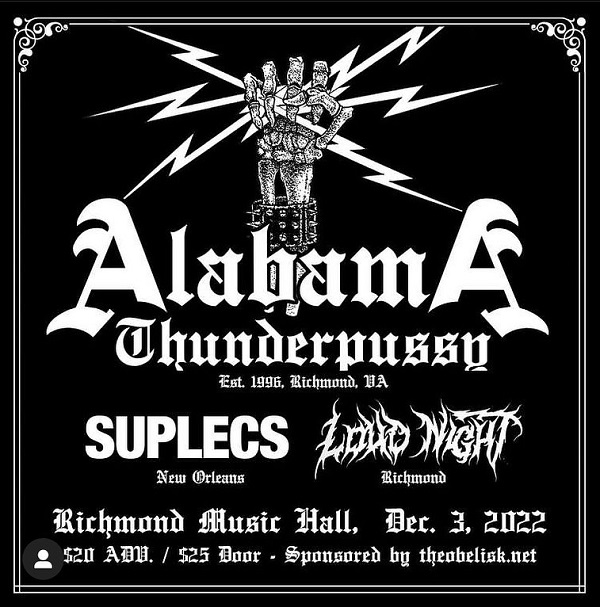 Former Alabama Thunderpussy vocalist Johnny Throckmorton, who sang on the band’s first four albums, shared the poster for the ATP reunion show on his Facebook page, along with the statement: “Obviously not me at the singing.”

Van Halen singers David Lee Roth and Sammy Hagar hit the road together in 2002 and dubbed it Song For Song – The Heavyweight Champs Of Rock And Roll Tour. Has ATP thought of something similar with Kyle Thomas and Johnny Throckmorton both singing songs on stage next December? “No, I don’t think that would be appropriate; and I don’t really want to do that. Listen, Johnny and I are friends. He’s a really talented singer. He now sings for Murdersome, which is a really killer thrash band in town. It looks like a sideways move, at best. And we’ve always been a band that fought from where you are. So when we were talking about doing this – obviously there was, and had to be – discussions about who is the vocalist we’re going to use? That was always the stumbling block… if we’re going to have a reunion, who’s going to be the singer? Realistically, it just boiled down to…we want to do all the eras (including songs from the Fulton Hill album, which featured singer Johnny Weills). I don’t want to be like, ‘Hey, we’re going to raise this guy from this roster, and this guy from this roster.’ Because they are everywhere. There are several singers in the area and tons of bassists in town who have been part of the ATP. Let’s stay where we were and move on. That’s the best way to describe how it happened. It wasn’t an affront, or anything like that. And I feel like if you’re doing the Van Halen thing, it becomes like, ‘Oh, they’re doing the Van Halen thing.’ And it’s more of a schtick. We are a band that wants to play songs. That’s kind of where we are.

What happens by December? “As I said, JB made this offer last fall. In January we decided we couldn’t do his festival, which happened last month, but we wanted to continue doing something. So a few weeks later, we had the idea to do the show. So it was, when do you want to do it? I had to talk to the promoters in town, for the venue. I didn’t want to not book it in a gigantic venue and nobody shows up. So we booked it in what I thought was a reasonable venue; it’s a 300 seat venue, which may turn out to be too small. But we “We have contingencies if that’s the case. We’ve been training since March – not much, once every five weeks or something. So we’re just going to keep doing that, keep training until the show. meanwhile… I’m not trying to make a big deal out of it. We’re not a super famous band, but there’s d people who have contacted me from afar. Thus, it gives people a chance to plan their lives. Because I think most of the people who want to come, who would be really excited about it, are older people who probably have jobs and kids. They can’t just say, “Oh, here I go, cool!” and drop the coin on a hotel and flight, if applicable. I have a friend who lives in England, and he was like, ‘Yeah man, I’m getting a plane ticket. I’m coming.’ Are you insane? I know people in Chicago and Texas who have told me about it the past few days…it could be a cool and fun thing. We will see.”

Undoubtedly, the number of people worldwide who would love to attend the Alabama Thunderpussy reunion show, but simply cannot for various logistical reasons, will far exceed those who actually attend on December 3. Have you thought about streaming the show live and charging $5 or $10 to watch it? “It’s in the back of my head,” admits Erik. “It’s like a first step forward for me. There are all these different little pieces that need to be in play before we start thinking about other pieces. It’s something that I definitely wanted to break with guys in the coming months, as a potential. But I would like to do things right, and that costs money. So I should figure out how it would work. 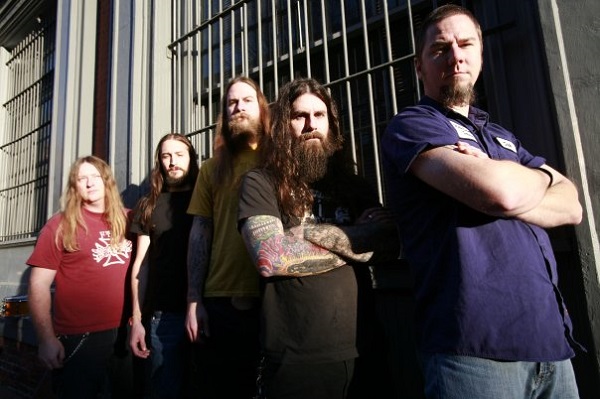 During the aforementioned rehearsals, did any new riffs surface? Are new songs starting to take shape? “No no. We’re just focused on playing well for this show first. I think of it as a litmus test, just see how it goes; make sure we perform well as a group. You know, get along; people want to hear it and see it. Then if we want to do more, we’ll see. I definitely don’t want to be a legacy actor where we just do the festival circuit. You can do that for a while, but at some point – like you said – you have to start throwing new stuff if you want to move forward as a band.

Keen fans will of course put the cart before the horse, because when they hear about the reunion show in December their thoughts automatically turn to new music and what form will that take – a single, an EP, an album? Will there be a Greatest Hits with some new tracks? “Yeah, I get it, and I see the value of going in that direction, just in the conversations we have,” admits Erik. “But I’ve been a bit of a stinky old man here, in the sense that I’m a bit of a ruler over everyone – let’s stay focused. We just have to not suck at this show. Once that happens, we can all talk about it. You know me man, I’m constantly writing songs and releasing stuff. The material will not be vacant. If we want to write songs, we can do it very, very easily. But I want to make sure we’re having a good time and doing the right thing for all the people who come.

The music industry has changed dramatically since Alabama Thunderpussy released their last album, Open Fire, in 2007 via Relapse Records. If the band plans to release new music, would the search for another label contract begin, or would you consider self-releasing it? “I don’t know. We are a group, it’s not a dictatorship. It’s good to know that we have options. I have always worked, to varying degrees and levels, since the ATP became black. And Kyle obviously has resources as well, with people he works with through Exhorder and Trouble. I think we’d have a few options. But like you said, the industry has changed tremendously, and if you want to load work, as a group you can do it all on your own pretty easily these days. It’s totally possible to keep it self-sufficient. So who knows? We’ll see. It’s step by step.”

Tickets to see Alabama Thunderpussy, featuring special guests Suplecs and Loud Night, presented by The Obelisk on December 3, 2022, at Richmond Music Hall in Richmond, Va., can be purchased now at this location. 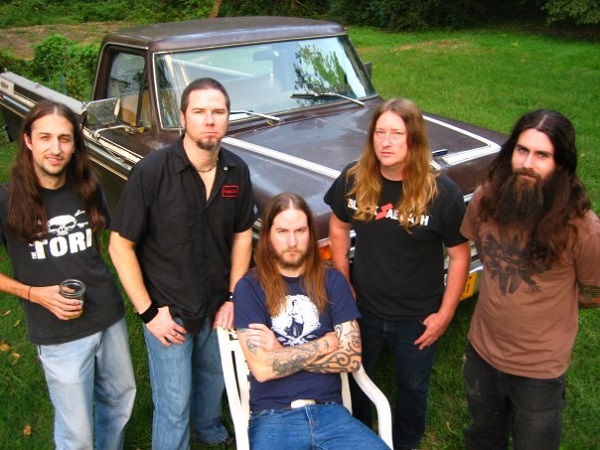